Wildcats wrap up Thanksgiving Showcase with dominant win over Kingsford 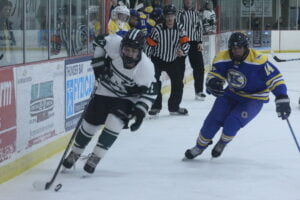 Alpena High hockey coach Ben Henry was content with the Wildcats’ victory Friday night, but was hoping his team would respond after nearly letting one get away and the Wildcats responded, putting together three dominant periods of hockey, controlling the game and skating away with a weekend sweep in their Thanksgiving Showcase, defeating Kingsford 4-0 on Saturday at Northern Lights Arena.

“The kids worked really hard and didn’t let off the gas like we did yesterday so that was nice to see,” Henry said. “We kept moving the entire time and put a lot of shots on net. We didn’t back down from hits, didn’t give up much defensively and it was a good win for us.”

The Wildcats got off to a dominant start and similar to Friday night’s first period, Alpena was firing shots on net, recording 18 in the period.

The Wildcats grabbed the early lead when Harrison Kaszubowski sent a shot on net, corralled the rebound and lit the lamp to put Alpena up 1-0.

Despite the dominant opening period and sending a ton of shots on goal, the Wildcats could only muster the one goal as Kingsford goalie Isiah Anderson was strong between the pipes as Alpena finished the game with 47 shots on goal.

Unlike last night, the Wildcats didn’t let up and continued to dominate and pressure the Flivvers.

After a flurry of scoring chances midway through the second period, defenseman Brody Thompson fired a shot through a crowd of skaters that found the back of the net on assists from Kaszubowski and Hamp to give Alpena a 2-0 lead after two dominant periods.

Alpena refused to let up and continued to send shots on net and it led to the third goal of the game when Reid Meinhardt sent a shot on goal and Cam Young controlled the loose puck and sent it into the back of the net.

The Wildcats added a power play goal with 6:31 remaining when Easton Schultz won a faceoff in the Kingsford end and Jaden Marchlewski rifled a shot that hit the crossbar and into the net to extend the Alpena lead to 4-0 as Wildcat goalie John Rensberry recorded a shut out in his first start of the season, stopping all 10 shots he faced.