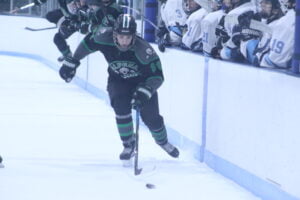 It was almost as if the Alpena High hockey team hit the rewind button.

The Wildcats traveled to Petoskey on Saturday, 24 hours removed from a beatdown of the Northmen, only to do the same thing to their Big North Conference foes a day later as Alpena mercied Petoskey for the second straight day, this time by a score of 9-0, needing just two periods again as the Wildcats (16-2) extended their win streak to 12 in-a-row and remain a perfect 5-0 in BNC play.

“I thought our start was a lot better than yesterday. Our foot was on the gas pedal from the start and we played hard for the entire game and that’s what we need, we need to be consistent with how hard we play every game,” Alpena coach Ben Henry said. “We still need to go to the net each shot and keep preaching the same things because they seem to be working. We need to keep playing hard every shift and be consistent so we’re at our best. I thought it was a good performance overall.”

The Wildcats wasted no time putting pucks in the net on Saturday as Gavin Winterstein put Alpena on top 1-0, scoring just over four minutes into the game on an assist from Bryce Moe.

The early goal once again opened the floodgates as Alpena poured it on as Anden Marceau scored less than 30 seconds later on an assist from Reid Meinhardt and Harrison Kaszubowski to give the Wildcats a 2-0 lead.

Just over a minute later, Cam Young went top shelf and lit the lamp on an assist from Luke Miller to extend the Alpena lead to 3-0.

Three minutes later, the Wildcats cashed in on a power play opportunity when Marceau corralled a rebound and tucked it into the net on an assist from Meinhardt and Kaszubowski as Alpena held a 4-0 lead after one period.

The Wildcats completed the dominant weekend with five more goals to complete the mercy.

Less than a minute later, Young scored his second goal on an assist from Jaden Marchlewski to extend the lead to 7-0.

With nine minutes left in the period, Alpena added its eighth goal as James Kuhl lit the lamp on a perfect pass from Easton Schultz.

Brody Thompson put the exclamation point on the lopsided weekend, burying the ninth and final goal on an assist from Marchlewski and Garrett Hamp.

Johnny Rensberry stopped all five shots he faced to record his fourth shutout of the season as Alpena outshot the Northmen 41-5.

The Wildcats will look to make it a baker’s dozen on Wednesday as they eye their 13th straight win and stay atop the BNC when Alpena travels to play Gaylord at 6:00 p.m.