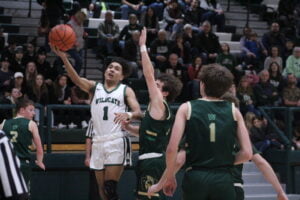 Over the past few seasons, the Alpena boys basketball program has had the luxury of passing the scoring torch after its leading scorer graduated. From graduating Alpena’s all-time leading scorer in Chris DeRocher a few years ago, the scoring load was then passed on to Cooper Bright who averaged well over 20 points per game.
With Cooper Bright now gone, the Wildcats enter the 2022-2023 season not sure where the majority of its scoring is going to come from and it may take more than one player to shoulder the scoring output on a game-to-game basis.

After a 13-9 finish a year ago, the Wildcats return a strong backcourt led by senior Devin LaMay, and juniors Tucker Bright and Easton Srebnik and the trio will be tasked with filling the stat sheet and the scoring column on a nightly basis in order for Alpena to remain competitive. Seniors Colt Gray, Brady Kollen and Zach Kunath will man the front court and Logan LaCombe is the fifth senior on the team that will see time at a guard position.

Along with Bright and Srebnik, the rest of Alpena’s junior class is made up of guard Avery Spicer and forwards Avery Samp and Caleb McEwen.
Connor Cameron and 6-6 Oliver Duthler are the sophomore pair on this years team that make up the rest of the Wildcat roster.
“The strength of our team will be our guard play, but overall, we are a pretty inexperienced team. The roster as a whole is young with playing experience and starting, but I have a few guards who have played a lot of basketball so they will be a huge focus for us and set the tone on offense,” Alpena coach John Pintar said. “I think we have a lot of guys with ability, but they’re going to have to work and figure out the pace of the game. I think we’re a team that will grow and get better and figure out how to play together. Even though we have three experienced guards, we don’t have a lot of continuity playing together, so we’re going to grow and the season goes.”

Of the returners, Tucker Bright held the highest point total on a per game basis from a year ago, followed by LaMay and Srebik. Bright does a majority of his damage from beyond the three point line, LaMay will start at the point and has greatly improved throughout the offseason and Srebnik gives Alpena another steady ball handler along with a strong defensive presence. Gray is the senior leader of the team and may be undersized at a 6-2 center position, but what he lacks in size, he certainly makes up for in strength and toughness.

It is likely that the Wildcats will go as far as it’s dynamic backcourt can take them and if there is a strength that a team would like to have entering a season, it’s experience at the guard positions as the trio of guards have played in and started plenty of games over the past two seasons.
“All year we want to compete. That’s the number one thing, no matter who we’re playing, if you play with maximum effort in high school, you’re going to have successful nights and you have opportunities to beat any team,” Pintar said. “We may not have the most talent, but our biggest thing will be how hard we work and if we’re able to outwork teams, play hard and play smart, we have the ability to compete every single night and as we go through the year. We’ll have a feeling out process early on, but hopefully as we get into late January and early February, we’ll understand what we have to do.”

Listen to Doc Z and the JT Pepper bring you select Wildcat home boys basketball radio broadcasts on 107.7 The Bay and also streamed at https://www.truenorthradionetwork.com/streaming/sports-streaming/