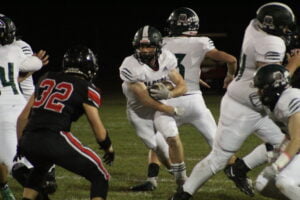 After the first play from scrimmage and for nearly a quarter, the Alpena High football team looked different and the Wildcats seemed determined to end their 2022 season on a positive note despite failing to meet expectations in another frustrating year.

Kaleb Donajkowski took the first play from scrimmage 80 yards to the end zone to put Alpena up 7-0 just 13 seconds into the contest.

The Wildcats forced St. Johns to go three and out and punt on it’s first two possessions.

The 10 and a half minutes belonged to Alpena, but the game took a huge turn as the Red Wings rallied for 30 unanswered points to close the first half, scoring on their final four possessions and eventually rolled to a 44-14 victory over the Wildcats.

The Red Wings continued to pour it on, scoring on their second play from scrimmage when Tyler Weber raced 41 yards for a touchdown, extending the lead to 37-7.

Alpena was on the wrong end of history as the Red Wings punched another ball into the end zone with 2:34 left in the third quarter when St. Johns quarterback Carson Pieters took a direct snap five yards up the middle untouched and the Wildcats set a new mark for points allowed in a single season and trailed 44-7 which forced a running clock.

Alpena was able to reach pay dirt one final time as quarterback Brady Pagels who filled in for the injured Jake Zann tossed a two-yard touchdown to John Rensberry.

Pagels finished the game 11-for-31 for 137 yards with a touchdown and interception. Colt Gray finished a solid career with six receptions for 103 yards and Donajkowski ran for 124 on 17 carries.

“I’m proud of our seniors for the work that they put in all year. They showed up every day and worked their butts off to be better and make their teammates better,” Mitchell said. “For our juniors, I’m excited to see how they improve and that starts Monday. The weight room is open Monday and that’s where it starts and we need to get more kids in the school out to play football.”

The Wildcats finish the season with a disappointing 1-8 record and the program faces a lot of questions going into what will be an important offseason as Alpena may need to make changes and go in a different direction if it hopes to get the football program turned around.