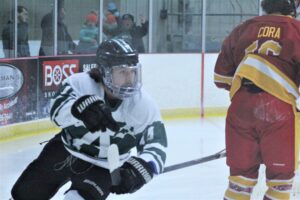 Both Alpena and Hancock couldn’t have asked for a much more competitive start to their respective 2022-2023 hockey seasons.

The two schools battled in the season-opener and in the end it was Harrison Kaszubowski netting a pair of third period, power-play goals and Anden Marceau sending a full length shot down the ice to put the game away with an empty-netter to complete the hat trick and propel the Wildcats to a 5-3 opening night victory over the Bulldogs on Friday in front of a packed Northern Lights Arena.

“Tonight was fun. It was nice to see the fans come out and all the hype that’s been built up and we kind of lived up to it tonight so it was nice to have a full crowd and get a win in front of them,” Alpena coach Ben Henry said.

After being deadlocked at two goals apiece after two periods, Hancock took a 3-2 lead early in the third when Benett Struros took the puck away behind the Alpena net and scored a shorthanded goal.

Trailing by a goal, Alpena was gifted a golden opportunity when the Bulldogs committed a pair of costly penalties and the Wildcats cashed in on a two-man advantage when Kaszubowski scored a pair of goals, just 14 seconds apart to put Alpena ahead 4-3 midway through the period.

After a pair of big saves from Alpena goalie Aidan Schultz in the final minutes to preserve the one goal lead, the Bulldogs pulled their goaltender late and Marceau corralled a puck off the faceoff in the Wildcats’ own end and send a shot the full length of the ice to put the finishing touches on a season-opening victory.

“This was the perfect way to start a season. Hancock is a very good team and they’re going to do some good things in Division III this year,” Henry said. “It was fun to see Harrison and Anden tear it up tonight and to see them shoot the puck, those aren’t high school shots they’re taking, those are Division I level shots, but they bring so much more than just shooting. I am proud of all our guys tonight for battling all night and played pretty flawlessly near the end of the game when it mattered most.”

Alpena wasted no time lighting the lamp and grabbed an early lead when Marceau scored 22 seconds into the game on an assist from Kaszubowski and Reid Meinhardt.

The lead was short lived as the Bulldogs won a faceoff in their own end and went end to end, scoring on a two on one as Sturos sent a perfect pass across to the waiting stick of Sam Roberts as Hancock tied the game at one goal apiece.

The Bulldogs took the lead with 3:39 left in the first period as they quickly cashed in on a power play opportunity as Bryce Hanner controlled the puck off the faceoff and found the back of the net to put Hancock up 2-1 late.

Nearly three minutes later, the Wildcats took advantage of a power play chance of their own as Marceau tied the game 2-2 on an assist from Kaszubowski as the two teams skated into the locker room after a wild opening period.

Meinhardt had a great opportunity to give the Wildcats the lead late in the second when he intercepted a pass, but was turned aside by Hancock goaltender Dan Wroblewski with 22 seconds left as the game remained tied at two after two periods.

“Things that will hurt us down the road are penalties. We took way to many penalties tonight. The penalties that we took tonight were not good penalties and I do credit our penalty killers especially in the five on three,” Henry said. “We killed that off and got a five on three ourselves and make them pay. Special teams now is how you win and lose hockey games and our power play is pretty deadly. We work on our power play religiously and we know what we’re doing and tonight we took advantage and it paid off huge for us.”