Wildcat hockey team ready to live up to high expectations 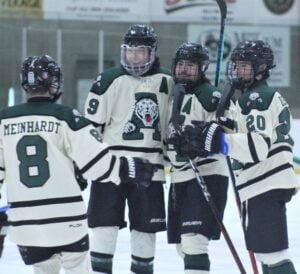 It was exactly 255 days ago that the Alpena High School hockey team skated off the ice after a 5-1 defeat to Calumet in a Division III quarterfinal contest.

The Wildcats had a long trip home from Marquette to reflect on that loss and despite coming up short, head coach Ben Henry, his staff and his returning players were ready for what the next season could bring.

Here we are – just three nights away from the start of one of the most anticipated hockey seasons in Alpena’s rich history.

The Wildcats open the 2022-2023 season Friday night against another Copper County opponent, Hancock at 6pm.

“Our goal is to win a state championship this year,” Alpena senior captain Anden Marceau said. “We have a lot of good players returning, we have a lot of seniors and our underclassmen are talented. A lot of us have been skating all offseason, getting ready for this year. We know the expectations are high.”

There has been a buzz going around the hockey town that is Alpena for the past several months.

“I’m very excited. It’s going to be a fun year. We have a lot of returners, a lot of seniors and you can tell all the work that the kids put in during the offseason, because during tryouts and the first weeks of practices, they all just look bigger, faster, stronger and their shots all look better and more importantly, their mentality is good, these kids are dialed in which is great to see,” Henry said.

With 16 of the 21 players on the roster returning, including 10 seniors, a pair of juniors, five sophomores and four freshman, this years Wildcat team is loaded with talent.

Marceau and sophomore Harrison Kaszubowski will captain this years team and the duo has the potential to be among the top point-getters in the state respectively. Senior goaltender Aidan Schultz returns, along with junior Jon Rensberry. Schultz will look to build off an impressive season a year ago and Rensberry will see time between the pipes as goaltending should be one of the many strengths for Alpena this season. Along with Marceau and Kaszubowski, seniors Jaden Marchlewski, Jack Steinke, Trent Fraser, Brody Thompson, Ian Lightfoot, Cam Young, Easton Schultz and James Kuhl are returning, along with junior Anthony Thompson and sophomores, Reid Meinhardt, Garrett Hamp and Michael Kreis. Bryce Moe is an incoming sophomore and freshmen Gavin Winterstein, Clark Weir, Luke Miller and Gunner Moe make up the rest of Alpena’s talented roster.

“This group knows what to expect and knows what it takes to be successful and we can’t take anything lightly, especially with our schedule this year,” Henry said “We’re going to be tested. We are going to play 25 hard games that will hopefully get us ready for the playoffs. The biggest thing for us this year will be consistency. I just want our guys to be consistent day in and day out.”

The Wildcats were bumped up to Division II this year and will host regionals with Manistee, Traverse City Central and Marquette. The regular season schedule will prepare the Wildcats for what is going to be a much tougher region. Along with 10 Big North Conference games, the Wildcats will compete in a handful of showcases against teams like Riverview Gabriel Richard, Detroit Country Day, Plymouth, Fenton and will once again travel to Trenton after being invited to the MIHL showcase where they will play a pair of the state’s top teams.

With strong goaltending, great team speed and a roster full of skaters who can put the puck in the net, the Wildcats are ready to not just get the season started Friday night, but put on a display for the home crowd and show just how good this team is and show their potential, while living up to the hype that has been put on them and meeting the goals and expectations they have set for themselves.

“My goal for this group is to just take it day-by-day, game-by-game. I want to win every game, but that’s also a lot easier said than done,” Henry said. “My goal is to have these kids grow even more than they already have. We know the expectations and have heard the noise, which is a good thing, but we need to stay within ourselves and make sure we control what we can control. These kids are mature enough now to understand that. Sure, a state championship would be nice and we’re going to win as many games as we possibly can, but we’re going to take it one game at a time with the goal to improve each and every day, play our best hockey that we can and hopefully good things will come with that.”