Tawas shoots the lights out in blowout win over Wildcats 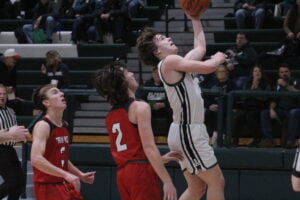 The Alpena High boys basketball witnessed on of the better shooting displays from an opponent they’ll likely see all season as the Tawas Braves came into Alpena High School and blew out the Wildcats 76-40 behind 16 three-pointers on the night, 10 of which came off the hot hand of senior Alex Kaems who poured in a game high 32 points.

The Braves were on fire from beyond the long line early and it was a trend that continued throughout the first half.

The first three shots from the field for Tawas were all threes as the Braves held the early lead and continued to build on it as Tawas was more aggressive on the boards, creating second and third chance opportunities, capitalizing on most of them as the Wildcats trailed 19-13 after one quarter.

Alpena had no answer for the Braves sharpshooting as Tawas connected on nine threes in the first half and put the Wildcats in a 42-24 hole at halftime.

“Tawas can shoot the ball very well. They have a good combination of size and the ability to shoot the ball,” Alpena coach John Pintar said. “The biggest disappointment early on was our inability to rebound. You can’t give good shooting teams multiple chances like we did. We lacked energy tonight and that’s on me as a coach too for not having the kids ready to go and better prepared. This is one we’ll definitely put behind us and forget about quickly.”

The second half was much of the same as the three-point barrage continued as Kaems and the Braves drilled eight threes in the quarter, four of which came from Kaems as Tawas closed the third quarter with 20 unanswered points and ran the Wildcats out of their own gym as Alpena trailed 68-30 after three quarters.

Along with Kaems, Granite Barringer and Vinnie Frank each added 14 points.

Tawas opened with three more points to begin the fourth to force a running clock before Alpena scored to finally break a 23-0 run that blew the game wide open.

The Wildcats were led by Colt Gray and Tucker Bright who each scored 14 points in the loss.

Alpena will put this game behind them and focus on snapping its current six-game losing streak when they return to their home court on Friday and take on Big North Conference foe, Gaylord at 7:00 p.m.

Listen to Doc Z and JT Pepper bring you select Wildcat boys and girls home basketball radio broadcasts on 107.7 The Bay and also streamed at https://www.truenorthradionetwork.com/streaming/sports-streaming/