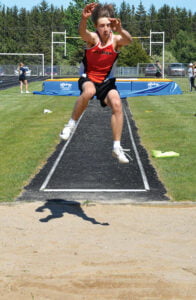 Appelgren is one of 120 finalists for the MHSAA Scholar-Athlete Awards for the 2022-23 school year, presented by Farm Bureau Insurance and is the only finalist from the surrounding area and first Hillman finalist since 2015.

“Brody is a great example of a student-athlete as he juggles school, dual-enrollment and three varsity sports (football, basketball, track and field),” Hillman Athletic Director Eric Muszynski said. “All of us here at Hillman congratulate Brody on being nominated for the MHSAA Scholar-Athlete Award.”

This is the 34th year of MHSAA Scholar-Athlete Award program and it has recognized student-athletes since the 1989-90 school year and again this winter will honor 32 individuals from MHSAA member schools who participate in at least one sport in which the Association sponsors a postseason tournament.

Farm Bureau Insurance underwrites the Scholar-Athlete Awards and will present a $2,000 scholarship to each recipient. Since the program started, 896 scholarships have been awarded.

To be eligible for the award, students must have a cumulative grade-point average (GPA) of 3.5 (o

n a 4.0 scale and previously won a varsity letter in at least one sport. Students were also asked to respond to a series of short essay questions, while submitting two letters of recommendation along with a 500-word essay on the importance of sportsmanship in educational athletics.

Brody Appelgren is the son of Dale and Lisa Appelgren.