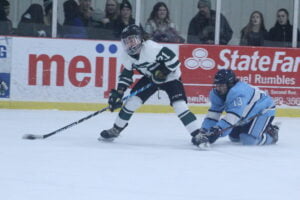 Friday marked a special return to Northern Lights Arena for the No. 5 ranked Alpena High hockey team as the Wildcats played on their home ice for the first time in three and a half weeks and first time in 2023.

Since Alpena’s last home game on December 28, the Wildcats have clawed their way up the state rankings, continuing their success and the buzz around the community was on full display Friday night as a jam-packed NLA witnessed just how dominant and special the Wildcats continue to be as Alpena cruised to its 11th consecutive victory, blowing out Petoskey by a score of 8-0, needing just two periods to lay waste to the Northmen (3-12, 1-6 BNC) as the Wildcats improved to 15-2 overall on the year and remain a perfect 4-0 and on top of the Big North Conference.

“It was a mercy, but I still thought we started slow and not our normal start like we had last weekend. It doesn’t matter who we’re playing, we have to come out and start fast in every game,” Alpena coach Ben Henry said. “We picked it up midway through the first and controlled play the rest of the way so that was good to see. It was nice to see us finish strong and that’s the same intensity we need every time we step on the ice.”

The Wildcats dominated as soon as the puck dropped, pressuring Petoskey and firing shots on net from start to finish.

It took time before Alpena finally lit the lamp with 5:23 left in the first period on a power play goal from Anden Marceau with an assist from Harrison Kaszubowski and Reid Meinhardt.

The Wildcats added their second goal of the period with 2:40 remaining when Marceau found the back of the net again on an assist from Cam Young to give Alpena a 2-0 lead after one period.

After outshooting Petoskey 18-1 in the first 17 minutes, the floodgates began to open as the Wildcats continue to pepper shots on net and it led to six second period goals.

Jaden Marchlewski went top shelf less than two minutes into the period on an assist from Young and Garrett Hamp.

A minute and a half later, Meinhardt scored on an assist from Kaszubowski to extend the Alpena lead to 4-0 and force a Petoskey timeout.

The Northmen timeout did nothing to slow the Wildcats down as they continued to pour it on as Meinhardt scored his second goal with 11:30 left in second on an assist from Marceau and Luke Miller as Meinhardt redirected a shot from Miller that found its way into the back of the net to give Alpena a 5-0 lead.

Just 10 seconds later, Marceau recorded a hat trick, lighting the lamp for the third time on an assist from Kaszubowski as the Wildcat lead grew to 6-0.

Meinhardt recorded a hat trick of his own, netting his third goal with 5:34 remaining in the second period to give Alpena a 7-0 lead on an assist from Jack Steinke and another from Kaszubowski who finished with four helpers.

Kaszubowski put the final mail in the coffin with 40 seconds left in the second when he scored on an assist from Marceau and Steinke as Kaszubowski finished the night with five points as the sophomore entered the night among the top 10 in the state in points and helped the Wildcats close the game early in dominant fashion as Alpena outshot the Northmen 36-2 to help goaltender Aidan Schultz earn his fourth shut out of the season.

“Our defense has been strong all season and that’s a big part of our success. Our kids bought in during the offseason, worked hard and got in the weight room and it’s shown,” Alpena assistant coach Mike Thompson said. “Top to bottom we’ve been strong all around from our defense, offense and goaltending. The kids listen and want to work and get better every day.”

Alpena will be back in action tomorrow against the same Northmen team when the Wildcats travel to Petoskey to wrap up the season series against the Northmen at 6:00 p.m.