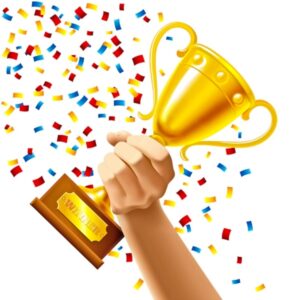 The four new members of the Alpena Sports Hall of Fame to be inducted on Saturday, May 6 2023 at the Aplex have been identified.

Ballots with the 15 nominees were mailed to the 650+ members to make the selection of who will be inducted.

The member’s ballots have been counted and now the Sports Hall of Fame Board of Directors is excited to announce this year’s honorees. They represent a variety of sports including gymnastics, boxing, golf and running.

In the coming months leading up to the Banquet the Sports Hall of Fame Board of Directors will be announcing the honorees of the Annual Booster of the Year awards. This honor goes to individuals who go above and beyond to enhance sports in the Alpena community through their tireless support and volunteer efforts.

The Board will also recognize a Team of Year. This honor goes to a team that not only won on their field of play but represented Alpena in a way that made the community proud.

Listed below are the official write-ups for each honoree:

JOHN CUNNINGHAM—AHS 1963
John was a four-year gymnast and golfer (1959-1963) at Alpena High School. Captain of the golf team and school record holder at the time. He was a two-year gymnast at the University of Michigan. In 1968, he started the Plymouth High School gymnastics club and cofounded the Michigan Academy of Gymnastics in 1976. He became the varsity coach at Plymouth Canton High School in 1979 where he remains at the helm today. In 2021, he received the Michigan High School Coaches Association 50+ years of coaching award. John has coached 12 MHSAA State Individual Champions. He has had six State Runner-up teams and has one MHSAA State Championship (2014). John has been the President of the Michigan High School Coaches and Judges Association since 1996 and State Representative to the MHSCA since then. He was President of MHSCA in 2000-01 and again 2018-19. He has been selected Michigan Coach of the Year four times. He was Runner Up National Coach of the Year in 2009, 2012, 2015 and won the award in 2018.

PHIL STRALEY—AHS 1966
Phil was a member of the Alpena Wildcats basketball team in 1965 and 1966 under coach Dick Dennis. In 1965, AHS suffered only one (1) regular season loss enroute to the Regional Finals. In 1966 the team lost in the State Quarter Final game ending the season with a 20-2 record. While attending ACC Phil was on the golf team setting the “low score” record. Phil transferred to Ferris State University and took his clubs with him. Later while Phil served in the US Army he was again on the golf team in the Panama Canal Zone. He has had success on the links, winning the Big Rapids City Open, Alpena City Open (8 times), and Alpena Country Club/River’s Edge Club Championship (14 times). He was Michigan 2008 Tournament Champions runner-up. He also placed in Top 10 at Florida National Tournament of Champions.

TIM HOLSWORTH—AHS 1973
Tim played baseball and boxed as a youngster. His 1-2 punch was felt throughout the state of Michigan when he took to the mound as well as when he stepped into the ring! In 1968, he was on the Huron Shores All-Stars team that won the District Championship. He was the winning pitcher in the Sectional Final win over Midland which advanced the team to the State LL finals. He was a two-time baseball letter winner at AHS.

Tim went undefeated at the Regional Boxing level in MI and WI during his amateur career which was in both the Saginaw and Grand Rapids regions. He won the prestigious Julius Piazza Award in 1975 for the Outstanding Boxer in the Saginaw Region. He won the Outstanding Boxer Award in 1980 at the WI State Finals for the Northern team. In 1975, he won the MI Open Division State Champ Welterweight division to advance to the National Tournament of Champions in Knoxville. It was in Knoxville that Eddie Bridges the MI head coach invited Tim to join the Kalamazoo Boxing Academy which had a pro team consisting of top World contenders like Lt Heavy Vonzeil Johnson and welterweight Floyd Mayweather, Sr. Floyd was a recent National Golden Glove Champion. Tim sparred with Mayweather every chance he got. Tim did fight a couple of notables, one was Brian Brunette whose career climbed to #2 in the world in his division professionally, the other being Tommy “Hit Man” Hearns. The Hearns vs Holsworth bout was the headliner fight in Oct. 1977 at the famed Pullar Stadium in Sault Ste. Marie, MI.  Tommy was ranked #1 by USA boxing just coming off a summer victory at the big Ohio State Fair tournament while this was Tim’s first fight of the season. Tim gave Tommy a good fight but, in the end, it was Tommy’s arm that was raised with a close decision.

In 1976, Tim was extended an invitation to the Mid-East Olympic Trials. He did not attend as he put his studies at Ferris State ahead of boxing. In 1979, he took his position at the outside corner of the ring as a trainer. He worked the corner for the WI Open Division champions at the Nationals. 1980 he strapped the competition gloves back on one more time and won the WI State Welterweight Open Division title. He advanced to Shreveport, LA for the National Golden Gloves Tournament of Champions. He hung up the gloves after this year. In October 1995, just shy of 40 years old, Tim entered a Tough Man Contest. He won all 4 of his matches, 1 by KO, and 3 by decision.

Tim has also coached/managed/trained the youth of the Marquette area in baseball. In 1998, he coached the Sr. Little League team to the MI State Championship.

MICHELE SUSZEK YATES—AHS 2000
While in high school, Michele was involved in Soccer, Track and Cross Country where she lettered 14 times. Michele was named 2000 Female Athlete of the Year. In running, Michele is a 2x Olympic Trials qualifier in the marathon and a 4x USATF National Team member in the mountain and ultra-trail events representing the US at the World and NACAC Championships. She has completed over 20 marathons, with 9 wins, and still holds numerous course records at the elite level. She is a 4x National Champion in the ultra-trail events and has numerous course records and wins in trail and ultra-races. Michele was also crowned Ms. Figure Colorado in 2008 where she had no less than a top 2 finish in each event she competed in within the year.