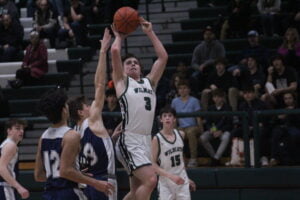 Just over two weeks ago, the Alpena boys basketball team coughed up a lead in the late stages of the fourth quarter and let a win slip away at Sault Ste. Marie, falling by three.

On Tuesday night, the Wildcats welcomed the Blue Devils and Alpena wouldn’t let history repeat itself after building a double-digit lead in the fourth, the Wildcats held on for a 47-40 win to snap their seven-game losing streak.

“We didn’t finish the game up there and lost a heartbreaker, but we finished tonight. Overall, we held them to one shot late and that was a difference,” Alpena coach John Pintar said. “We haven’t been in these situations much this year, playing with a lead and we can practice situations, but when we’re put in the fire, it’s completely different and we’ll get better. This is big win for our growth moving forward.”

The Wildcats were much improved on the offensive end in the first half as both teams went back and forth during the first two quarters.

Alpena used the three ball to score nine of its 11 opening quarter points as the Wildcats trailed 12-11 after struggling to rebound and committing too many turnovers early.

The Blue Devils responded with six unanswered to take a two point lead as the two sides exchanged leads in the quarter, but eventual both schools were tied 25-25 at the break.

The Wildcats came out strong in the third quarter, this time it was Tucker Bright leading the Alpena offense with eight of his 13 points for the game in the third, knocking down a pair of triples to help the Wildcats build a 37-28 lead after three as Alpena held the Blue Devils to just three points in the quarter and it proved to be the difference as the Wildcats continued to maintain their lead in the late stages of the fourth as Colt Gray scored eight of his 10 points for the game in the second half and Sault struggled to to get shots to fall as Alpena held on.

“We had a really good third quarter on both ends of the court, especially defensively,” Pintar said. “We weren’t perfect offensively, but we did enough and I’m really proud of our guys and we competed hard tonight. I told the guys if we play hard in basketball, we’re going to give ourselves a chance and we did that tonight and got ourselves a big victory.”

Listen to Doc Z and JT Pepper bring you select Wildcat boys and girls home basketball radio broadcasts on 107.7 The Bay and also streamed at https://www.truenorthradionetwork.com/streaming/sports-streaming/