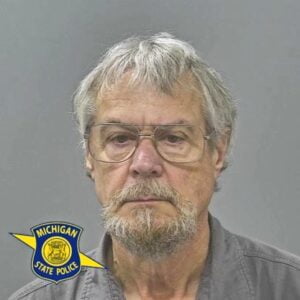 PRESS RELEASE FROM THE MICHIGAN DEPARTMENT OF ATTORNEY GENERAL:

An Alpena man accused of making false claims against Michigan State Police troopers during the execution of a search warrant has been bound over to circuit court, said Michigan Attorney General Dana Nessel.

Thomas VanDuinen, 70, of Alpena is charged with the following:

Three counts of false report of a felony, a four-year felony offense; One count of providing a false statement to a police officer, a two-year high misdemeanor, and One count of use of a computer to commit a crime, a seven-year felony.

In February 2021, Michigan State Police (MSP) executed search warrants on VanDuinen’s home and on a pole barn he was renting for his business in Alpena. Two days after the execution of the search warrants, VanDuinen began filing demands for the return of his property, and then filed lawsuits against MSP. In his demands and lawsuits VanDuinen made numerous allegations against the MSP troopers who searched his home and business accusing them of stealing money and hydrocodone pills, and forging signatures on the search warrants that were used to search his properties.

VanDuinen reported these allegations to the MSP Professional Standards Section and a criminal investigation was initiated in June 2021. The Michigan Solicitor General authorized the close of the investigation against the troopers in January 2022.

“Law enforcement officers who uphold their duty to serve and protect deserve to be vigorously defended against false accusations,” said Nessel. “I take seriously accusations of misconduct and am committed to thoroughly investigating such claims to ensure the public trust. In this case, Michigan State Police were falsely accused, and the offender will be held accountable.”

An arraignment date has not yet been scheduled by the court.