Alpena girls ready to build off of district championship season 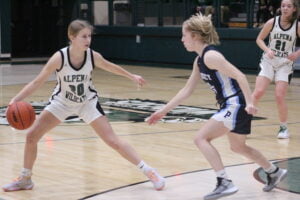 After 21 years of entering a new season chasing goals of winning a district championship, the feeling is different this year for the Alpena High girls basketball team as the Wildcats are ready to defend their crown after ending a lengthy championship drought.

“We’re expecting a lot this year. Our expectations are high coming off of our first district championship in a long time. We’re a bigger team this year. We have some size, some key guards returning that are going to be able to put the ball in the hoop,” Alpena coach Laura Dubey said. “We have some experience and girls who have really stepped into leadership rolls after being on the team for the past two years and that’s going to be important for us all year.”

Junior guards Reese Wisniewski and Avery Dubey return and will form one of the top backcourts in the Big North Conference and provide Alpena with plenty of backcourt experience and the ability to run an offense and score.

Senior Marah Wisniewski is back after suffering a knee injury in the regional semifinal game a year ago and will be one of the leaders of this Wildcat team. Along with Marah Wisniewski, Emily Kalisch returns for her senior year and will provide a big presence in Alpena’s frontcourt.

Lindsey Rondeau grew during the offseason and will be relied heavily on for big minutes. Junior Olivia Precord and sophomores Reaghan Fitzpatrick and Kiera Prue also provide the Wildcats with size.
“The girls have really put time in during the offseason and worked hard. The end of the season last year, our girls realized a lot and you could see that we weren’t just running an offense, we were playing basketball and playing good defense and that’s going to be important for us this year,” Dubey said.

After an emotional district run a season ago, Alpena hits the reset button and has the same focus to not only defend its district crown, but also make noise and compete in the BNC. The Wildcats finished 14-9 last year and in the middle of the pack within the conference and the hopes are to contend for a BNC crown, while defending their district.

With a pair of the top guards in the conference and plenty of size, the Wildcats are capable of adding more hardware to the trophy case by seasons end.
“We want to be a contender in the BNC. I believe in this group and not only to we want to contend for a BNC title, but we want to win the district again. That may seem like a big goal, but after last year and with what we have coming back, we feel like it is an achievable goal,” Dubey said. “Emotionally, coming back after last year, we just have to keep putting the work in and these girls have been putting work in for a long time and are ready for this season.”

Listen to Doc Z and the JT Pepper bring you select Wildcat home girls basketball radio broadcasts on 107.7 The Bay and also streamed at https://www.truenorthradionetwork.com/streaming/sports-streaming/