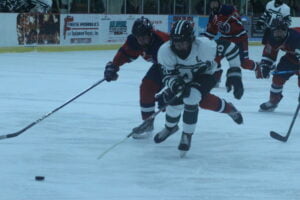 Entering Saturday’s contest, the Alpena Wildcats and Traverse City Bay Reps were putting their unblemished records on the line at Northern Lights Arena.

It took all three periods and two minutes of overtime, but it was the Bay Reps taking advantage of a power play opportunity in overtime to win 5-4.

Alpena took a 4-3 lead with 4:32 left when Jaden Marchlewski scored a power play goal to give the Wildcats a lead.

Less than a minute later, the Reps tied the game with 3:27 to play.

The Wildcats had chances late, but couldn’t find the back of net in regulation and came up short, while playing without leading goal scorer Anden Marceau who was ejected in Friday’s win over Traverse City West and was serving the first of his two game suspension.

“It was a rough first couple of minutes in the first period, but after that we settled down. I knew it was going to be like that, it’s tough playing with your superstar out of the lineup, but it was a good game after the first six minutes,” Alpena coach Ben Henry said. “We battled back, we had some guys step up and it was a good game. It always sucks to lose, but I was happy with the way we played and battled. It’s one of those losses that’s a little easier to go home with.”

The Reps applied early pressure and opened the scoring two minutes into the game when Riley Pierce found the back of the net.

After a sluggish start, the Wildcats picked up their play and created a handful of scoring chances, dominating the final minutes of the first period, but couldn’t get in the board and trailed by a goal after one.

Traverse City quickly cashed in on a two-man advantage as Grant Lucas scored to extend the Reps’ lead three and a half minutes into the second period.

Trailing by two goals, Alpena responded in a huge way as Reid Meinhardt and Harrison Kaszubowski displayed some incredible chemistry to get the Wildcats right back in the game.

Just 16 seconds after falling behind by two goals, Kaszubowski found a wide open Meinhardt for a shorthanded goal to cut the lead back to one and get Alpena on the board.

Less than two minutes later, Alpena goalie Aidan Schultz made a big save before the Wildcats sent the puck down the ice to kill the penalty, but just before the penalty ended, Kaszubowski raced to the puck after a line change and sent the puck to Meinhardt for bother shorthanded goal to tie the game at two.

The two weren’t done, with 8:08 remaining in the period, it was Alpena’s turn for a two-man advantage and the Wildcats capitalized as once again it was Kaszubowski feeding Meinhardt who sent a puck into the net for his third goal of the period to complete the hat trick and give Alpena a 3-2 lead.

The Wildcats were on the receiving end of some tough luck with 4:33 remaining in the period as the Reps sent a puck down the ice and Schultz went to play the puck, but it took a crazy hop off the boards and out front to Larson Millar who was able to get just enough to send it into the empty net as the teams were deadlocked at three after two periods.

The Wildcats will take their 4-0-1 record to Gaylord next weekend where they will face off against Detroit Country Day at 2 pm on Friday and Riverview Gabriel Richard at 6 pm on Saturday in a weekend showcase.