Alpena avoids let down with shootout victory over Blue Devils 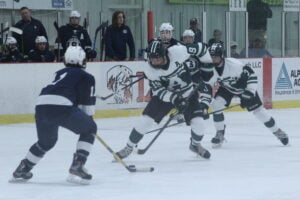 It took three wild periods and nine rounds of a shootout for the Alpena High hockey team to avoid a let down and skate away with a 5-4 victory over Sault Ste. Marie in a shootout in the first game of their annual Thanksgiving Showcase on Friday night at Northern Lights Arena.

The Wildcats held a 2-0 lead after two periods, but Sault stormed back, scoring three unanswered goals to take a 3-2 with 9:18 to play and stun Alpena and its home crowd.

“We weren’t as fast as last week and their goalie played really well tonight. The kids got ahead and thought the game was over and we have to learn from that,” Alpena coach Ben Henry said. “Sault never gave up and took the lead, but credit to us for coming back and pulling it out.”

After a one-sided first period where the Wildcats looked to be in total control, the final two periods were anything but one-sided as the Wildcats surrendered a two-goal lead, but in the end, cashed in with a power-play goal to tie the game from Harrison Kaszubowski with 3:58 to play and force a shootout.

Avery Wilson began the shootout with a goal to put the Devils up 4-3.

The next 15 shooters were turned away by the two goaltenders and finally, on the 18th attempt in the shootout, Jaden Marchlewski went top shelf over the blocker of Sault goalie Triston Forgrave to end the game.

“We took the early lead and we stopped moving the puck and everyone was a goal scorer all of the sudden. There will be changes because we just weren’t clicking,” Henry said. “This is a mentality thing. You can’t show up one day, be in the top 10 and just expect to win. We have to work for it every day. We’re not there yet. We’re an okay team, not a great team yet and we have a lot of work to do.”

The Wildcats wasted no time peppering Forgrave with shots early and often.

The shots eventually led to a pair of goals just over four minutes into the opening period when Marceau lit the lamp to put Alpena on the board with assists from Reid Meinhardt and Kaszubowski at the 4:15 mark in the first.

Just 21 seconds later, the Wildcats found the back of the net as Garrett Hamp scored on a rebound off of a Cam Young shot on a goal set up by Trent Fraser.

The Wildcats had a load of scoring chances in the first, putting 17 shots on goal in the period, but Forgrave made a handful of a big saves as Alpena held a 2-0 lead after one period and kept the Blue Devils in the game and did all he could in net.

The second period was much different as the Wildcats were a bit lethargic after the dominant opening period.

The Blue Devils outshot Alpena eight to five in the period, but Wildcat net minder Aidan Schultz was strong between the pipes and preserved Alpena’s two goal lead after a second period filled with late penalties.

“We turned the puck over way too much and we deserved to get scored on because we just couldn’t get it out of the zone and stopped skating and working,” Henry said. “We have to be a lot more disciplined and hopefully we’ll learn from this, be better tomorrow and come ready to work and play much better than we did tonight. A win is a win and It’s a learning thing, it’s early in the season and we’ll get better.”

The Wildcats improve to 2-0 and will be back in action tomorrow in the final game of their showcase when they play Kingsford at 4 pm.