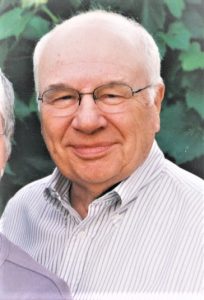 Gordon Nethercut, devoted family man, professional leader, and community servant, passed on peacefully on Good Friday, April 2, 2021 at the age of 92 after several months of declining health.  He will be dearly missed by his wife of 68 years, Vernie; his three children–Cynthia Nethercut (husband Joseph Altonji) of Madison, Connecticut; John Nethercut (wife Sonie) of Baltimore, Maryland; and William (Bill) Nethercut of Ossineke, Michigan; and three grandchildren–Matthew Altonji, Justin Nethercut, and Mary Altonji.  He was preceded in death by his brother, Robert (and wife Jean) Nethercut, of St. Paul, Minnesota.

Gordon was born June 28, 1928 in Sandusky, Ohio to Donald and Helen (Porch) Nethercut. He graduated from Elyria (Ohio) High School in 1946 and from Denison University in 1950 with a BA in Economics.  At Denison, he was a member of Lambda Chi Alpha Fraternity, Blue Key Honor Society, and Beta Alpha Psi (an accounting honorary society).  He was a loyal Denison alumnus and attended reunions into his 80’s.  He was past president of Detroit West Denison Alumni Club.

Gordon was a Korean War veteran, serving two years in the US Army as a combat infantryman with the Third Infantry Division and as a staff chaplain assistant at Eighth Army Headquarters.

After completing his military duty, he returned to the US and married Vernie Schmitkons of Elyria, Ohio, in 1953.  He also enrolled in the University of Michigan School of Business Administration and graduated with an MBA degree in 1954.  His first employer was Lybrand, Ross Bros. & Montgomery (now PricewaterhouseCoopers) in Detroit for eight years.  He became a Certified Public Accountant (CPA) in 1958.

Seeking a job that required less travel so he could spend time with his family, he joined Warren Young in 1962 as a partner in Warren Young & Company of Alpena and moved his young family to Alpena.  After taking pride in the growth and services of his firm for 33 years, Gordon retired from Nethercut, Cernat, Straley & Ilsley (now Straley, Lamp & Kraenzlein) in 1995.  He was a member of a number of professional accounting societies and of the Northeast Michigan Economic Club.

Gordon was a calm, wise, and supportive presence in his children’s lives.  The grandchildren and Uncle Bill all have fond memories of Camp Nethercut—one week  doing many of the same things their parents did—camping, canoeing, visiting Mackinac Island, eating Lud’s hamburgers, watermelon-seed spitting contests, and going to plays.  Despite their far-flung family, Gordon and Vernie always made sure that they all gathered regularly for family holidays and events.  Gordon and Vernie were still flying to these family gatherings until age 90.

Gordon was active in the United Church of Christ at four levels–local church (First Congregational UCC of Alpena), United Northern Association, Michigan Conference, and two national church boards.  For this varied service to his church, and for service on many state and national church special committees, he received the Harold Skidmore Award in 1998.  He was recently recognized for singing in the church choir for 50 years.

He  served on the board of Alpena’s LARCC (Lutheran, Anglican, Roman Catholic, and Congregational) for several of its formative years. He also was appointed to the Board of Directors of Heifer International in 2001 and served for four years.

Gordon always enjoyed working and socializing with his fellow Lions and was an active member for nearly 60 years.  He was past-president of the Alpena Lions Club and first Cabinet Secretary-Treasurer of Lions District 11E-2He received the Melvin Jones Fellow Award; led the Lions Campaign Sight First II, in which Alpena Lions won district and state honors; received the Lions International Life Member Award at age 90 in 2018; and served as lead reporter for the Alpena Lions Club to the Alpena News from 1996 to 2019.

Finally, Gordon believed it was important to contribute to his community.  He was a founding member of the Community Foundation for Northeast Michigan n 1974.  He was also a Trustee emeritus and past-president of the Community Foundation.  He was active in the Community Chorus; Cub and Boy Scouts, serving for several years as District Finance Chairman; and Alpena Community College (ACC), as a member of the ACC Board Trainer Group. He taught a course in local government accounting to township clerks and treasurers at ACC for Michigan State University for several years.

Throughout his life, Gordon took pride in writing news reports for his many organizations.

With Vernie, they took 11 Elderhostel (now Road Scholar) trips; attended many Association of Lifelong Learners (ALL) classes; and founded what is believed to be one of Alpena’s longest lasting couples book clubs,

A private memorial service for the immediate family will be held at First Congregational UCC of Alpena on Friday, April 9th at 11:00 a.m.  Rev. Dr. H. Robert Case will officiate. Guests are invited to join by livestream via a link that can be found at https://www.uccalpena.org/  The memorial service will be recorded on YouTube. Arrangements are provided by Bannan Funeral Home.

Donations in memory of Gordon are suggested to be sent to the First Congregational UCC of Alpena or to the Alpena Lions Club Memorial Fund.

Get updates on special events!